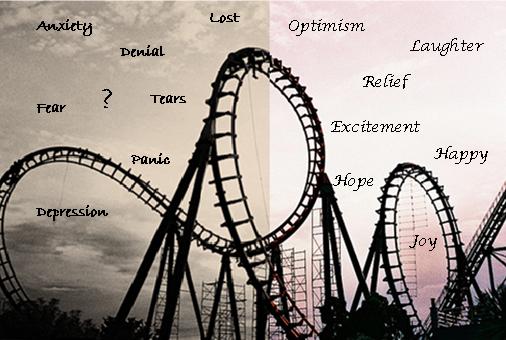 R&B songstress Vivian Green sang a song where she described a relationship with a man as an emotional rollercoaster. You see, things would go very well for a certain amount of time, and then here comes the free fall. Unlike the roller coasters at Six Flags, these types of relationships aren’t fun as the dive into a downward spiral.

The drop in rollercoaster relationships usually entails cheating, abuse (mental, physical, verbal, etc.) and down right disrespect. Only to be followed by promises to do and be better. Which of course, we want to believe. After all, we’re in love. Why wouldn’t we want to believe the person we love, who has claimed to love us, will do things that will actually make us happy instead of things that hurt as and makes us cry.

“I’m so tired of you pacifying me with promises you know that you’ll never keep.” ~Vivian Green  Emotional Rollercoaster (Album Version)

For a few weeks, maybe even a few months, things do seem to be better. Your partner is more attentive. They’re calling instead of texting, they’re taking you out to nice places, they’re telling you how much they value you, you’re waking up to breakfast in bed. Then POW, without warning, here comes another downward spiral.

You begin to question where you could have gone wrong. You wonder, is it you? Are you the cause of the havoc? You may even attempt to be a better mate. You become more attentive, affectionate, whatever it is you thought you may have lacked previously. You see, now, you’ve decided not be a victim, but to be a participant. You want control back of the ride and you believe if you take the controls things will get better. And, they may. For awhile at least.

But here comes another downward spiral. All that you’ve done is going unnoticed or your mate is not appreciative of the things you do and the sacrifices you are making in the name of love. You become resentful and once again, everything is your fault because hey, you stuck around through all the other downward spirals, how dare you complain now?

That’s the issue with emotional rollercoaster relationships. You waited on the line to get on the ride, but you didn’t really know what you  signed up for. Once on the ride things go great in the beginning and you become enamored with the way you’re being treated. But, don’t forget this is a rollercoaster, what goes up will come back down. Your mate has shown you exactly what you’re in for by maintaining the relationship.