I Say Yes!!! Why I Decided to Get Married 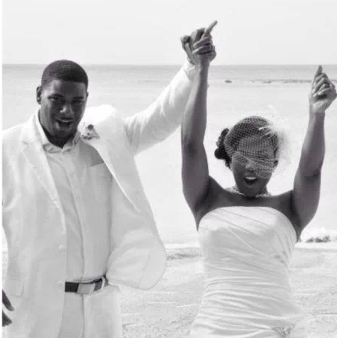 What’s up people!!!! Okay so check it out…I’m a little less than a month away from my wedding and it’s finally dawning on me that I am about to be married….I can see it now…all the ladies reading are like “awwwwwww” and all the fellas are like “you sure you want to do that?” lol. Surprisingly enough my answer to that question is “YES.” Let me explain….

I know that as a man society tells us we are not supposed to be excited about marriage right. I know we are supposed to be victims of our own sexual appetites that we lustfully desire to feed with a plethora of women, but ultimately we are left still hungry for this little thing called SUBSTANCE! So as a result as men we fight this internal battle of sex vs. substance and while we are busy fighting we usually end up losing the substance we wanted, while searching for the sex, just to look back and say…”damn I lost a good one.” Man how many times have I seen/heard this scenario, thus I am choosing the substance over the sex so with that said…I say YES!

So with saying yes to the substance there comes a responsibility. The responsibility is the one that says that I will embark on a journey that is bigger than myself and my own selfish desires so that I may lay a foundation that will build a legacy. You see as men we must come to a point where we realize that our legacies are built not by the number of women we conquer, but by the impact we have on our families and the people around us. How many men are now 50 years old looking back regretting the fact that they never did right by their family, or that they never had an impact that they will be remembered for, and now they are trying to make up for lost time? I don’t want to build my legacy reactively, instead I want to build it proactively so with that being said…I say YES!

So earlier I mentioned “sex vs. substance” and it brings me back to a conversation that I had with an old head where he said “you have to think beyond the sex.” Being a male one of the hardest things to do is “think beyond the sex.” We desire women from a young age, we learn to embrace the chase, and our identities become rooted in sexual conquests. As a result of the time and energy we invest into validating our manhood through sex many of us never learn how to validate our manhood through character and family. Now don’t get me wrong we will always be physically attracted to other women just as women will be attracted to other men….but it is only after we have learned to “think beyond the sex” that those thoughts don’t manifest into actions. One thing every guy knows is that if there is no substance behind the sex then after the orgasm there is no more desire to really even be in her presence…I know every lady believes he wants to stay around and cuddle, but the reality is that no substance=no cuddle=be gone! #TruStory

So everyday that I tell someone I’m engaged inevitably I hear the same thing…”you sure you want to do that”….”you’re too young”…”why would give up the single life?” Being that I am only human I can’t lie and say that consistently hearing those things don’t make some sort of impact on my thought process. Some days I can’t help but wonder, what if, or is it the right decision, or would the streets be more “fun.” I think this though is where the gift God gave me of vision, influenced by the experiences he has put me through me in my life, that in turn have aided in my growth all help me to value this idea of life being about something bigger than yourself. Okay let me break that down. God put me through some things that forced me to grow up and helped me to see that even early in life you can work towards fulfilling his vision of people deciding to be selfless and choosing to do things that are bigger than themselves!

I don’t want to get too philosophical and I won’t sit here and act like it’s always just that easy. What I will say though is that what makes “saying yes” so easy for me is very simple. It’s the fact that God put someone in my life with so much substance, that’s so genuine and so loving, that’s so selfless and not to mention beautiful…that she brings out everything good in me, while accepting the bad in me, all while believing in the great in me that has yet to come. With that being said….“I say yes!”

So you may be asking…Troy what’s the point or what’s the message? My point and message is this: choose substance over sex and that will allow you to embrace the responsibility of being bigger than yourself so that you may begin to build your legacy now instead of trying to rebuild it later when it’s too late, but when you do decide to say “yes” do it with someone who makes it easy to do so! Thanks for reading folks!
________________________________________
Written by Troy Spry and republished with permission from Xklusive Thoughts. Click the link to check out his blog.

« Dear CRF, I’m Not Looking For a Maid But… (Previous News)
(Next News) Flag On the Play »