SORRY, HE’S NOT THAT INTO YOU 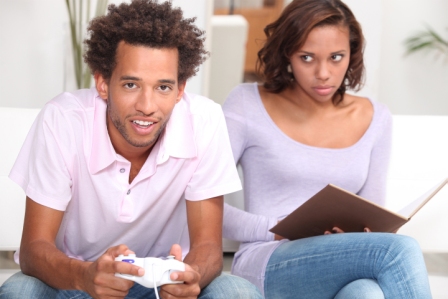 Some young lady is sitting here reading this blog right now racking her brain trying to figure out where she stands with the guy she has been seeing. She is dreading the “what are we” conversation but she has finally grown tired of not knowing where she stands. He’s convinced her that “what’s understood doesn’t need to be defined” and blah, blah, blah.

They’ve been talking and “kicking it” but she has no clue where this is going or if he really even likes her. What should be simple addition has turned into calculus and physics. Well the bad news is that if she has to overthink it she probably already knows the answer. Well just in case she is still a little confused here are a few ways to tell that maybe he just isn’t that into you.

How many of you ladies are out there just wishing a guy would be consistent with you but he is very sporadic! You get a series of texts one day and then you hear nothing for days or weeks at a time. You are frustrated because you want to believe this is going somewhere but where there is no consistency and there is no growth. Men are consistent with women they are investing in and see more for. More times than not the inconsistency means that you’re more of a convenience than a priority. It’s not about what a man says it’s about what he shows! If he shows he’s not that into you then odds are he isn’t!

2. He Never Wants to Go Out in Public

Men have egos and quite naturally when a man finds a great woman that he is really into he wants to show her off. Secondly, when a man is really into a woman he also wants to prove himself to her. This means he wants to do more than just “Netflix and chill.” He wants to take her out on dates so that she feels important and so that he can also look important. If a man never wants to go out with you in public then odds are he is just not that into you… (or he already has a girlfriend).

3. He Takes NO Initiative

Men like to prove that they can handle situations and take control of situations. This means when it’s a woman he really likes he has no problems making plans, taking initiative, and executing plans to be with her. If you have to wonder why he never calls first, why he never carries conversations, why everything feels like pulling teeth. If you find yourself always having to initiate all of the contact and plan all of the time you spend together then odds are he just isn’t that into you.


4. He Only Has Surface Level Conversation with You

You ever wonder why the conversation goes any deeper than what happened today? You ever wonder why somehow the conversation always seems to come back to sex? Ever wonder why you’ve been “talking” to this guy for weeks or months but you don’t know anything about him that doesn’t revolve around physical attributes and preferences. He never speaks to you about his dreams, goals, ambitions, family, fears, flaws, or anything else. When a man is truly into you and really wanting to get to know you he will begin to share more with you than just a bed. If he doesn’t then odds are he’s just not that into you.

5. He Never Mentions the Future

When a man see’s you in his future he will speak that way. He will have some foresight about where you could potentially fit in and he will talk about what he wants from you. He will use WE language and WE plans. He won’t be vague or unclear. He will not only say it but he will do it by introducing you to the people in his life who are important to his future. If nothing about the future ever comes up then odds are he’s just not that into you!

Yes, I know many will read this and say that it’s more difficult than what I am mentioning. I would challenge you to think about the last time you got into a relationship or saw a friend get into a relationship. If you think about it what you will probably notice is that wasn’t hard at all to tell if that man was into you. I always say that “when it’s right it’s easy” and if it’s too hard then you probably shouldn’t be in it!
_______________________________
Written by Troy Spry. Troy Spry is a certified life and relationship coach, speaker, author and “Reality Expert.” A graduate of Winthrop University in South Carolina, he studied Psychology and officially began the study of human behavior. Troy started a blog called XKLUSIVE THOUGHTS as a way to invite the world to share in the many interesting thoughts and conversations he has about life, love and the lessons they’ve taught him. His new book, Teach Me How to Love is available for pre-order now.