THE ABUSE YOU CAN’T SEE 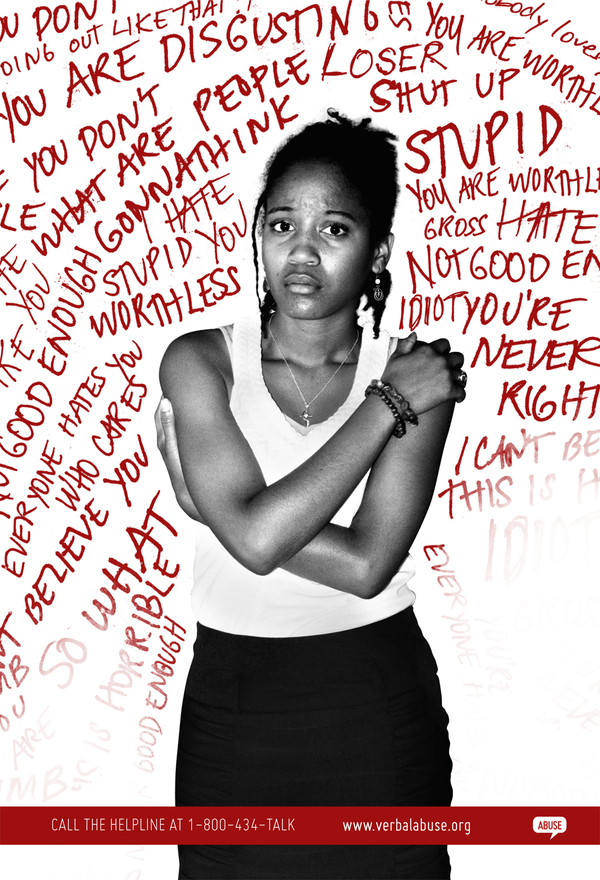 When we hear about domestic violence, one of the first images that pop into our heads is a man physically abusing a woman. This has been the mascot of domestic violence, and as a consequence has taken the importance away from the other types of abuse that exist in a relationship. This occurs simply because “what you can’t see, you won’t know.” Mental abuse does not leave any physical scars. The police officer who is called in for a dispute cannot see the scar that is embedded in your brain. He can only see a black eye, a swollen lip, a bloody shirt. You can’t make a complaint for mental abuse. Where is your tangible proof? When it comes to physical abuse, usually the stronger person in the relationship, usually the male, is the abuser. However, when it comes to mental abuse, it is usually the heartless one in the relationship who is the abuser.

I’m sure some detractors will say, “Well you need to have tougher skin and deal with these kinds of comments.” My response to them is to imagine having to deal with these types of comments every day? It wears on you, it drains you. You start to question yourself, your identity. This other person slowly but surely starts to gain a mental advantage on you. They’ve picked at you enough that they know your sensitive spots. Whether it’s your weight, your looks, your intelligence, your job, your sex, family problems etc., they know how to hit you where it hurts. The question you ask is why would people say mean things to you and intentionally attempt to hurt you? I’m about to give you the psychology behind it.


There are different types of mentally abusive people. You have people who are intentionally abusive and those who do it without even knowing it. Sarcastic people usually are mentally abusive without knowing it. They see your flaw as a true observation and have no regard to how it makes you feel. These people, if you tell them how something makes you feel, 9 out of 10 times they will stop doing it because they never did it to abuse you. But these people aren’t the problem. It’s the people who intentionally abuse others who need to be challenged.

Abusers need to be in control. They always need to have the advantage in the relationship. There’s a saying that goes “The person with the most power in a relationship is the person who cares the less about the other.” The irony with the abuser is that they are powerless without somebody to abuse. You give the abuser more and more power by not leaving. You give the abuser more and more power by entertaining their abuse and defending yourself. Some of us believe that defending ourselves from the abuse by shouting little outbursts of our own will back the abusers up. This is far from the truth. Believe it or not, abusers like abuse and are used to it. You’re playing a game in which they are the consummate professional. You will lose. They will tease you; tell you that you are soft, that you are weak. They will say anything to make you question yourself and that their actions are normal.

Stopping the mental abuse starts with you. You can prevent the mental abuse early by always proclaiming your identity. You must know who you are and let nobody’s opinion of yourself outweigh your own. You must let the abuser know that you feel you are being abused. Everybody deserves a warning, and this is a way to test if they are doing it intentionally. If that person truly cares about you, they will step back and think about how it affects you. They will make changes, slowly and surely. But if they deny that they are mentally abusive, then you may have a problem. The reason I say this is because they are disregarding your feelings completely. Personally, I made the mistake of staying before and have suffered tremendously because of it. It doesn’t stop, it doesn’t get better, and all that will happen is that you will go crazy, get physically violent, or break down. None of those options seems successful.

So the best way to deal with mental abuse it to stay away or get away from it. Nobody has the right to put you down or hurt your feelings, especially if they claim they love you. And always remember if they can say something bad to you, imagine the bad things they could do to you. You really don’t want to take that risk. Don’t sit there and take the abuse.
_______________________________
Written by Bryant A. Buntin, Author of Dear Women I Haven’t Slept With

« ONLINE DATING: THERE’S AN APP FOR THAT (Previous News)
(Next News) LET YOUR GUARD DOWN »