PLAY THE GAME TO WIN! 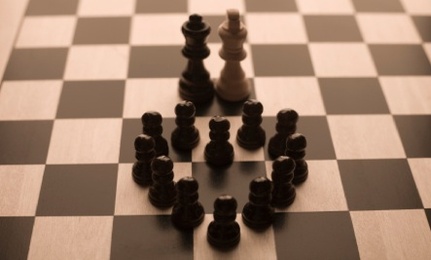 On my way into work today, I was perusing some comments on a topic in a group.  The topic was based around how to handle the period between dating, and “exclusivity” with regards to sharing information, and a person’s sexual exploits with people OUTSIDE of the dating relationship (aka how you play the game).  The answers were diverse, but as I was reading over them some trends emerged that caused a realization:

Many of us are failing in our committed relationships and marriages, because we fail to prepare properly for success in those relationships, beforehand.

I have a son who is a gifted basketball player.  His natural talent is obvious – and has been for years – to everyone who has ever watched him play.  That being said, my son, for all his natural gifts, will probably never play professional or even college basketball.  There is a reason for that, and it relates to how we treat our relationships.

My son will never play professional ball, because he never developed the habits and unswerving dedication required of a professional ball player.  His idea of “practice” is to go down to the local gym, and dominate competition that he is clearly better than.  He does little to examine his weaknesses and improve them, he does not work tirelessly on strength and conditioning, in short, he does not practice the habits needed to take his game to the level required to compete at the highest levels.

Too often, I see us do the same thing, metaphorically speaking in our relationships.  Make no mistake:  A marriage and in some cases a long term relationship, is “competing at the highest level”.  And it is very VERY difficult to have a successful relationship, capable of lasting a lifetime, if one does not build in the habits BEFOREHAND, and PREPARE themselves in EVERY WAY possible, for said relationships.  You can’t just “show up on draft day,” ready to be the best “player” on your team, when you haven’t prepared, dedicate yourself to, and practiced properly for success in relationships.  This means more than just working during the season, but also doing work in the “off season” (Read:  While you are single), to become the best relationship version of yourself.

I have three school age children, and a 19 year old.  I tell them all the time, something I learned as a child from my football coach:  How you practice is how you’ll play.  Essentially, the habits, good or bad, that you build on the practice field, are what will be revealed on “Game Day”.

It’s okay to live single, and behave like a single person.  But if you spend all your time practicing your single habits in the “off season” of your relationships, you will find those same “single” habits, showing up when it’s “game time”.

For many of us, “coaching” is a problem when it comes to deciding what behaviors to model in our relationships.  Recent studies suggest that between 65% and 73% of children are being born into – and raised in – households that are run by a single parent.  This was true in my case growing up for much of the time, and so it is a dilemma facing us today that I can very much relate to.  As such, there are not many good examples of marriage and relationships for many of us to emulate, model, and learn from, with respect to our own behaviors.  And even if you are in a two parent household, if that household is dysfunctional, it can present problems with respect to what kinds of behaviors you decide to model.

Sometimes that can work in your favor, if you have the right mindset.  I learned a WHOLE LOT about what NOT to do, in the relationships I DID see, and the outcomes – both immediate and long term – of some of the behaviors and habits that showed up in some the more dysfunctional examples of relationships around me.  But on many occasions you need more than that.  I realized, as I was pondering this issue this morning, that as I look back over my life, I began preparing to be a husband LONG, LONG before I got married.  I practiced modeling behaviors that I found to be beneficial to a relationship.  I worked tirelessly to eliminate “weaknesses in my game” – behaviors that would not serve me or my relationship in the long run.  Think:  Selfishness, lack of consideration, evasiveness and deceit, an unwillingness to compromise, an inability to put your spouse first (above career, family, and everything else), etc.

These are traits that society tells us are okay while single, and under a specific set of circumstances, might even be encouraged under the guise of – ironically – “playing the game”.  But they don’t serve any of us in a marriage.  And so if you practice the traits and habits described above during your single days, you should not be surprised when these traits and habits show up in your marriage.

Finally:  I would like to say one last thing, regarding what I have shared above.  When choosing a mate, it is very very important that you choose a mate who is already practicing the habits that you wish to see them perform, day in and day out in your relationship.  Ladies, do not choose a man and expect him to morph into a Leader of your home, if he has not, and cannot demonstrate the “practice” of leadership in his daily walk and his single life.  Gentlemen, stop asking a woman to become a wife, with wifely habits, when you don’t require the practice of those habits in the women you chase in your day to day life.

It doesn’t work that way.

If you want a mate that exhibits certain behaviors in your marriage, or long term relationship, it is folly to choose a mate who is not PRACTICING those characteristics and traits in their single life beforehand.  Yes, some can change in an instant and become a totally new person at “I do”.

So what do you do, if you’ve been “practicing” for single life all this time, and you realize that you want to be in something long term?  You have to change your habits.  Unfortunately, depending on how long you’ve been practicing “singlehood” it may take longer to undo your “single habits” to make yourself relationship ready.  Remember:  It takes twice as long to learn to do something the right way, if you spend too much time learning to do it the wrong way in the first place.

So how do we do that, and what behaviors should we emulate?  It seems like such a no-brainer, but you’d be surprised at the number of people who don’t know that you should work on the following things in your “relationship game” at all times:

It seems intuitive, but in the “single” game, these traits can be sold as “counterintuitive”.   The first three traits and habits are critical for building a sense of trustworthiness and consistency in a relationship.  As I peruse various relationships on Facebook, I’m often astounded at how often people are encouraged to lie to one another about their behaviors, past and present.  They will lie about the number of people they are dating, where they stand on various issues, whether or not they are sexing other people, etc.  This is counter intuitive in the long run to a healthy relationship.  But it’s great for “tricking” people into what will likely become a dysfunctional relationship situation down the road.

The last four behaviors are critical to building a foundation that is ESSENTIAL for a marriage (or any strong long term relationship for that matter):  The ability to put your spouse before anyone else, which oftentimes – though not all the time – includes yourself.  I am a huge proponent of the kingdom principle of “sowing and reaping”.  What you put in the ground is going to come up.  If you plant “love, joy, peace, patience, kindness, goodness, gentleness and self control, into the RIGHT PERSON (that is key – like real fruit – what you plant will not grow everywhere.  There’s a reason you don’t grow oranges in “Antartica”), those things will show up as a constant in your relationship with said person.  So you should be planting and sowing these habits and behaviors into YOURSELF and those around you unceasingly.  Even in your “off season”.  Remember – How you practice is how you will play.