DEAR CRF, SHE PICKED HER BABY DADDY OVER ME 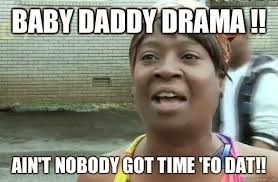 DearCRF, “I’m dating this woman. We’ve been together for about 9 months, and it became a serious relationship over the last 3 months. She has two children from a previous relationship. The first couple of months of our relationship was smooth. The problems started once we became serious and she introduced me to her children and had me staying by her house.

Somehow, her children’s father caught wind of it and he was unhappy. He doesn’t want other men around his children he says, but I think the truth is that he doesn’t want her to move on, especially because our relationship has gotten serious. Certain days out of the week, I stay at her house and leave from there to go to work. I often leave my car. Well, one day he came by to pick up his kids and he saw my car in her drive way and went ballistic. He keyed my car and even stuck a foreign object in my gas tank. She saw her and attempted to stop him. She cursed him out, told him to take the kids and leave. When I got back to her house and saw my car, I was very upset. She explained to me what happened.

Naturally, I wanted to kick his ass, but because he was the father of her child I decided not to go that route. So what I did was go down to the police station and filed a report. She came down there with me and stated what happened. The police went to his residence and arrested him. I found out that he had a prior criminal history and could be facing a few years in jail 1-3 max. I decided to press charges. But since I wasn’t there, I needed her to be a witness. Well, when the court date came, she froze up on me. She said that she couldn’t send him to jail because her kids needed their dad.

Needless to say, she didn’t show up and the charges were dismissed since I wasn’t at the scene. I was upset with her, and this damaged our relationship. I stopped staying over her house, and less than a month later broke up with her. She was really distraught saying that she introduced me to her kids and if I didn’t have plans on staying I shouldn’t have gotten that close. I don’t feel like I was wrong. I felt like she chose him over me and I just didn’t want to be in a relationship where he could do stuff like that and get away with it because he’s the kid’s father. She’s his enabler.

RESPONSE
No! You were not wrong or overreacting. She has allowed her criminal ex to run away a good man. You’re probably not the first and her actions tell me it won’t be the last. Her baby daddy drama is a Code Red Flag and running away from that situation was a wise decision. Ain’t nobody got time for that!

« FALLING IN LOVE (Previous News)
(Next News) DEAR CRF, HE WANTS TO HAVE SEX… »