WHY ARE YOU SO SCARED OF MARRIAGE? 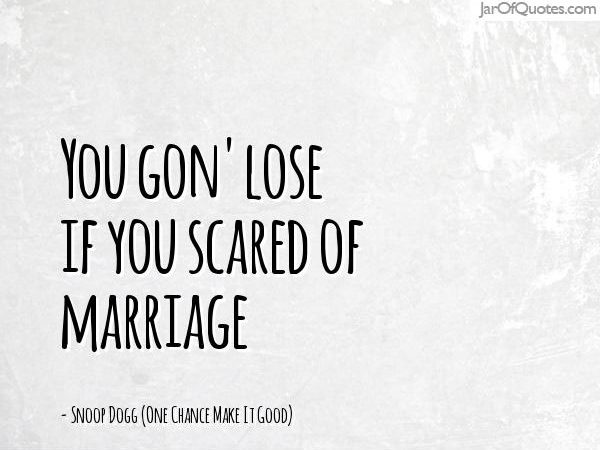 At one point in earth’s history—actually, as early as a few decades ago, getting married was on the top of most people’s agenda. Move out the house, get a job, get married, and have children. That was part of the American dream. The dream was not complete without getting married and most people sought to get married early in life. Not so anymore.

​With these drastic changes in the ages men and women are marrying the question must be asked—why? Why you waiting so long to get married? You scared? Why you scared?

​What’s the reason? Are people afraid of getting divorced? True, the divorce rate is tapering off and people are divorcing less. But that is only true because people are marrying less. You can’t get divorced if you’re not married. So is that it? People are waiting to get married because they think that if they wait longer they decrease their chances of getting divorced?

​Or is it the kids? Do men and women wait longer to get married because they really don’t want to have 5, 6, 10 kids and so waiting until 35 is the perfect solution to avoiding that problem. The “how many kids do you want” topic does not even have to come up. It’s implied. Without ever saying a word you already know that, “We got married at 33. The most kids we having is 2. Tops! Don’t even ask.”

​Or is it that people just want more uninhibited sex with multiple partners? I mean, why tie the knot and be locked down with one person at 23, when I can have least 10 more years of amazing sex with at least 5 people (maybe more) then settle down at 33? (Do people really even think like that?) With the influx of dating apps, all which seem to promote and glamorize dating (uninhibited sex), this may have some truth to it. And with the glamorization of dating comes the minimization of marriage–marriage now seems dull, boring, uneventful and so—blah. So is the reason people marry later and later in life because being single is so much fun—dating and sexing, sexing and dating.

With marriage comes a lot of—of things. Commitment. Communication—lots of communication. An invasion of privacy. Sacrifice—giving up things you would rather not give up. Babies, no, crying babies. If people are afraid of marriage, the fear is real. People should fear marriage. Because when you fear something you take it more seriously. You plan for it. You study it. You take time to figure it out as to alleviate any fears that you have. Being afraid means you are aware of what it is you are afraid of. No hero, no brave person has ever conquered a thing without first fearing it. Maybe, just maybe, more people should fear marriage. It might be the best thing for you and your future spouse.
___________________________
Written by Solon Phillips. Solon Phillips holds a JD/MBA from American University. He resides in Bowie, Maryland. He is the author of the book Colored Water: Marriage, Involuntary Divorce, the Law & God.