The Year of the Sidechick 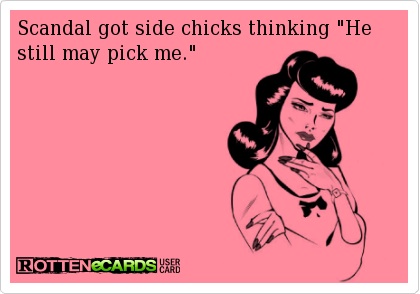 Apparently, 2014 is the year of the sidechick. It’s no secret that pop culture has played a part in making the sidechick acceptable. Thanks to shows like Scandal and Being Mary Jane, it would appear that the side piece has crossed over from the underground and into mainstream consciousness.

The younger women of today seem to be more open to the idea of being a sidechick, in part, due to pop culture’s influence. At any given time, turn on the radio and you will hear countless songs about a woman being praised for “playing her part”. The majority of these songs talk about a man’s side piece being someone who they can always count on in the crutch, and is willing to do anything for him.

While it’s easy to blame the male rappers and singers for these songs, women are twerking in the clubs to these songs and singing along with them, almost co-signing the behavior.

Let’s not forget the show, Love and Hip Hop, which follows ratchetness in Atlanta, New York and soon-to-be Los Angeles (you know it’s coming). This circus of a show not only proudly displays women reveling in their side chickness, but they display the rules to this sidechick shit; there’s a step-by-step booklet on how to get your game on track and the “Ten Crack Commandments” teaches on how not to get your wig pushed back . Obviously, you can see how one would think that the last couple of years has been the “reign of the jump off”.

We are allowing and condoning further this behavior by not owning up and taking responsibility. You see, it’s not the year of the jump off, sidepiece, sidechick, or whatever you want to call them, and they do not have Hall of Fame career years either. We’ve become so ‘laxed in our morals and standards, that we’ve allowed no open doors for what many consider a shameful act to be celebrated.

The gradual acceptance of the side chick is becoming very much real. So much so, that our younger generation will grow up thinking this is the norm, and standard male behavior to have a sidepiece. Young women will enter “relationships” expecting to be the sidechick while at the same time having aspirations of becoming possibly the main girl. If not, then she’ll be content in her number two status, as long as some type of compensation is given.

So, again, to say that the sidechick is having a good year is lazy and dangerous. We should ask ourselves, where did we go wrong? Behavior that was once despised is now being proudly displayed through the air waves and on TV.

What do yo think? Do you think this is the year of the sidechick? Or do you think that we’ve just allowed it to be accepted?