EVERYBODY NEEDS A PRENUP 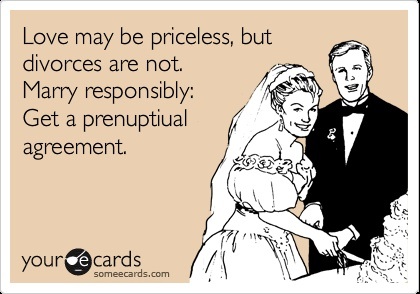 I don’t even know why this is even an issue! Every married couple should have a prenuptial agreement. The rules are very simple. Whoever instigates the divorce walks away with nothing. That’s right. No car. No house. No custody. Just the clothes on your back and in the closet. After walking away with no assets, seventy five percent of your future earnings for the next ten years goes to the spouse that you are leaving. Now I hear what you’re saying. Why have a prenup if you lose everything? Well, that’s the point.

It’s very clear that most of us just don’t handle options well. It’s clear in the things that we do. I’ve stated before that we have this obsession for upgrades. Every two years I’m eligible for a cell phone upgrade. And although nothing may be wrong with my phone at the time, I take the upgrade. But why? It may have a bigger screen. It may offer a rebate of some sort. But honestly, do I need it? The answer is no. And this is our approach with dating as well as marriage. We’re cool with our current relationship but don’t let Oprah become available. Don’t let Boris leave Nicole. As soon as the Facebook status reads “Separated” or “Divorced”, we are looking at the latest upgrade.

One of my favorite movies is “The Dark Knight Rises”. In the movie, Bruce Wayne/Batman has to climb out of a prison that only one other person has escaped from. After several attempts, Wayne is discouraged and does not want to climb again. It is the advice of an older convict that tells Wayne that he has to climb the wall with no safeguards. If he misses the jump, there is no rope or net to catch him if he falls like he has had in the previous attempts. There has to be an element of losing everything in order for Wayne to finally make the jump.

I see you, shaking your head in disbelief. “What if I’m being cheated on? What if I’m being abused? I can’t leave?” Nope. You can’t. And yes, it sounds radical but it is my desire to provoke you. To wake you up from this dream where marriage is nothing but being able to live together legally. Marriage is a covenant, not a contract. Since it’s not a contract, it would behoove some of us to look closer at who we select to be a spouse.

Look, I’m not the greatest authority on marriage. I’ve failed at it my first go round. The lessons I’ve learned from it have helped me in this second go round. I desire to be married however I’m not desperate to be married. I understand that marriage is a full time job with great benefits. If you don’t balance and execute your duties to the fullest of your employer (i.e. spouse, children), you will fail and find yourself unemployed . . . again.