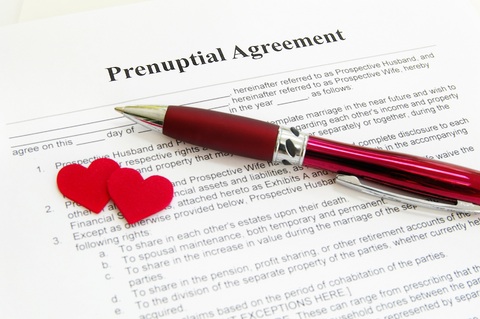 Should the preunptial agreement conversation arise during your engagement, fear not. A prenup could be just the insurance plan you need. I’ve heard many hopeless romantics say that getting a prenup is just setting your marriage up for failure: I vehemently disagree.

Unlike popular sentiment, a prenuptial agreement can protect both parties in case the marriage doesn’t end up being “’til death” do you part. The prenup puts in place parameters of dissolution when emotions are normally at the highest; during a divorce.

Let’s take a look at two recent high profile divorces — Portia Stewart v Kordell Stewart and Amber Rose v Wiz Khalifa. The Stewarts did NOT have a prenuptial agreement while Wiz and Amber did.

THE STEWARTS
When Portia decided to divorce Kordell after two years of marriage she received nothing, nada, zilch. There was no prenuptial agreement and Georgia is not a community property state. Had Portia been wise enough to negotiate a prenup, she would likely have received some support to help her get back on her feet.

THE KHALIFAS
After one year of marriage, Amber Rose will be awarded 1 million dollars due to her prenuptial agreement. That’s in addition to any child support she is likely to get if she wins custody of their child.

See the difference? Don’t be afraid to ask for, or sign a prenup. Don’t be naive and think that it’s a bad omen in your relationship. Relationships end with or without a prenup. Might as well set up some rules for the end, in case there is one.

What do you think about prenups? Would you sign or ask for one? Why or why not?

« THE PERVERT NEXT DOOR (Previous News)
(Next News) Dear CRF, How Much Should I Spend? »