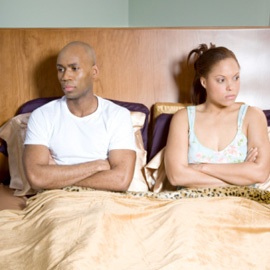 You know what? I hate arguing. Even more so, I hate arguing when it doesn’t look like we are getting anywhere. Especially if it means fighting all night.

I use to subscribe to the ‘never go to bed angry’ way of thinking, but, after a while, I realized just how selfish and silly it is. Of course no one likes arguing and no one like going to bed angry but if while you and your s/o are fighting and a resolution nor and end seems to be in sight, someone should take a TV time out.

You can be mad and watch Leno if you want to. I’m taking my ass to bed.

I know this is contradictory to most relationship advice, but if you stop to think about it, what’s worse than an angry person besides an angry sleepy person? Going to bed angry is probably the most productive thing that either one or both of you can do, especially if you are just spinning your wheels trying to argue over each other.

Trying to stay up to resolve an issue may actually do more harm than good. Sometimes things are said that we may not mean, words are spoken that we cannot take back and no one is thinking logically, especially when you’re sleepy.

If you or your s/o have repeated things 2 or 3 times, or you’ve been arguing so long that you forgot what you were arguing about then than you either need to agree to disagree, just stop and realize that the fight is getting you nowhere, go to sleep or just zoom zoom and boom boom.

I know for those who feel it’s more important to get their point across than what they are actually arguing about won’t like the idea of calling it quits and getting a good night’s sleep. But I can almost guarantee a good night’s sleep and clearer perspective will lead to wonders, you won’t have to worry about saying something that you may end up regretting, and since words are like bullets, once they are out there you can’t take them back. You may also realize that you are wrong or just see things from the other person’s point of view, and what’s wrong with that?

So if you can, stop trying to have marathon fights and take your ass to bed.