FELLAS, GET OUT OF THE FRIEND ZONE 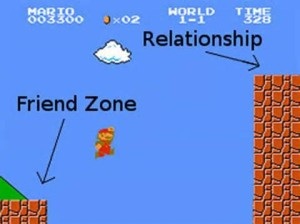 It won’t require too much work to find a meme floating around social networks reminding us guys to stay out of that despicable, anguish-filled, heart-breaking, hell-hole we all know as the “Friend Zone.”

For those who may not be up on the lingo, the friend zone is a place where guys end up who have initially failed to tickle the fancy of a desirable woman. For decades it usually results in said guy being stuck in limerence over this woman who subsequently finds solace in telling him about all her bad relationships. He’s stuck there viewing himself as the answer to the question she’s not even asking — if you get my drift. So now we see why guys avoid this zone with as much fervor as possible. Then again, maybe we’ve been approaching this thing all wrong. Hear me out fellas…

Here are five reasons why being in the Friend Zone can be a favorable play to help get you to the End Zone:

1) It allows you to know the actual person instead of their representative. First impressions only come around once, and in most cases, you’ll find individuals putting on their best face. The friend zone allows you to see them through unfiltered lenses. It provides you the opportunity to see that woman without her mask. The added benefit in that is you may find out that you aren’t as attracted to this woman as you initially thought. You also may find out that she’s the one, as she may begin to give off indicators that may have never surfaced if you weren’t in a comfortable place such as the Friend Zone.

2) The Friend Zone is a pressure-less zone. There are no expectations. You aren’t expected to woo her or impress her. Your only obligation is to not be a douchebag. This is a great position to be in. It’s always good to under-promise and over deliver. With her expectations being low, and there being no pressure on you, it allows you to operate under virtually no stress. Use this to your advantage. The guy who isn’t in the friend zone doesn’t have this luxury. Which brings us to the next benefit…

3) It permits you to be frugal and shrewd, two qualities that we often don’t practice when it comes to our interaction with the ladies. You’re bound to spend hundreds, if not thousands of dollars per year dating women. Many of these women you only see once or twice and you’re on to the next. That night out on the town, those expensive concert tickets — that money could be best served in other ways, especially during the “Get To Know You Better” phase. The friend zone provides you the perfect excuse to spend time with the woman you’re interested in within a tight budget. The park, museum, festival, Barnes & Noble, hiking, etc. are activities you can do with your friend that have great benefits without extravagant costs.

4) “Hand Down Man Down” is a phrase Mark Jackson, Coach of the Golden State Warriors, frequently used while calling games for ABC. The quote is concerning where in basketball, it’s easy to shoot over a guy when his hand isn’t stretched out in your face. When your guard is down, it’s easy for someone to have their way with you. As we tie this into women, it’s easier to infiltrate their minds and thought patterns when their guard isn’t up. Women often have their guard up, and for understandable reasons. Unfortunately, we don’t have a society dominated by gentlemen, so a woman has no choice but to live daily with her guard up to protect her heart from being abused by the common jerk. So while you hang out in the friend zone, be sure to appreciate this V.I.P access and take care of this privilege. You’ll learn a lot about that woman, and you will have the chance to genuinely build with her as a result. You’ll find yourself slowly building a great foundation of friendship. With this occurring, your chances of possibly transitioning your friendship in the future are not only more likely to happen, but are effortless — thanks to the months/years you invested building with her without the deep resistance.

5) Majority of men hate the Friend Zone so this gives you the perfect opportunity to differentiate yourself from the rest. From the beginning, guys do whatever’s necessary to assure that they don’t find themselves with a reserved spot. If you don’t fight it, if you don’t view it the way most guys view it — as being this extreme negative — you open your mind to the possibility of seeing the benefits. You also separate yourself from the majority of guys who are too distracted by their egos and uncontrollable impulses. I can’t stress enough how imperative it is to show women that you aren’t in a rush to get into their pants or jump for that boyfriend/husband title. Let your actions feature your willingness to simply be her friend because as cliché as this may sound, it truly is best to be friends first. After settling into your position, you’d be surprised how fast you’ll be the guy she’s most comfortable with — the guy that she confides in; the guy she tells her secrets to and comes to for advice; the guy she depends on to help her when problems surface in her life; the guy who wipes her tears, helps her conquer her fears, and that she inevitably finds herself unable to stop discussing with her girlfriends.

Gentlemen, separate yourself from the rest and before you know it, you’ll likely be where most men have no access to: The end zone. This is for all the “good” guys out there who find themselves in the friend zone and have a negative perception of that circumstance. Your mentality is your reality and it’s very important to try to find the positives out of every perceived negative. It’s important for us to embrace that friend zone and not get discouraged by it but to see the opportunity it presents. I wish you all much success on building great foundations for the relationships you seek. Oftentimes, all we see is the final result and think we can only find happiness in getting to that end goal. I can assure you Deion Sanders had fun doing the Prime Time dance as he made his way pass receivers running towards the end zone. Take it slow, only fools rush in.
_______________________________________
Written by Marquise Watson, Founder of Thee Urban Sophisticate