Last week news and gossip outlets reported that Dwight Howard, center for the Houston Rockets, and multi-millionaire has begun garnishing money from the accounts of the mother of his child, Royce Reed. Reports say that Howard received what possibly could have been the entire balance of Reed’s credit union account, $2,432.64. This amount is being garnished to collect on a $535,000 judgment stemming from a defamation lawsuit Howard won after Reed breached the terms of their gag order by speaking about their relationship during her stint as a Basketball Wives reality star.

This is the just latest offensive tactic in the back and forth conflict between ex lovers Howard and Reed; each have spoken ill of the other and both are constantly filing lawsuits against each other. In this situation, it seems as though both of the adults have forgotten about the best interests of their child; or perhaps neither care.

While I must agree that Howard is well within his legal right to not only sue, as he did and won, but to garnish Reed’s account to collect his awarded damages, I cannot condone this tactic or believe that it helps their ongoing conflicted relationship as co parents. In fact, it seems as though he has forgotten that Reed is the primary care taker of his child and if her life is miserable their child’s life will be miserable as well. If she can’t pay her rent, put food on the table, pay her car note, etc., their child will be affected as well. Often times adults forget that they are to be examples for their children and set aside their own selfish desires and egos in order to ensure the health and safety of their progeny. 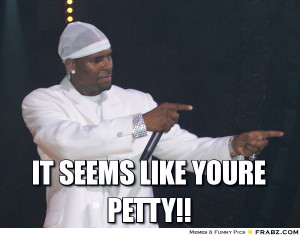