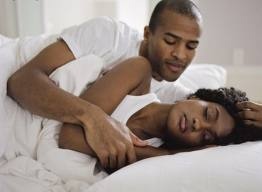 “ As I lay in bed next to this man, my man whom I have once again denied sex I begin to think. This relationship moved way too fast. For the first time in a long time I began a relationship with sex, throwing everything that I knew out the window. I attempted to get to know him but he was already hooked on my physical. Constantly rubbing and touching my body when I invite him over, totally taking me out of my comfort zone. We had been speaking on the phone for about a month when I invited him to meet me at the bar where I was hanging out with my friend and her family. I had some drinks, he was a man, he was there, I took him home, I knew what I was doing, but i wanted to go on as if it didn’t happen but at the same time get to know this guy. I couldn’t get past constantly being groped and he’d mention that i started it and he was a man and to just say no. But he pouts when i say no. Long story short he is my man now. He claims to love me so much yet he knows me so little. I’ve tried breaking up with him several times because i am simply unhappy with him. He always pulls me back with the idea that i may be running from a thing because im afraid of something. Due to the fact that I am chronically single I think it to possibly be true. But as i lay here next to this man, I think…. Sex is not supposed to feel like an obligation in a relationship, it’s something you are so willing to do, especially in one so fresh. He doesn’t force me to but once i turn him down he shuts down. But why am I turning him down if he is my man? He is handsome and he is also well endowed but it does nothing for me. The most mental stimulation I get from him is when we are arguing about something. There is not one thing about this man, my man that turns me on. How do I let him go or how do I push past the set standard and go back to pick up what we sped past in the development of our relationship? Help me please.”

Sounds like quite an interesting situation. Being in a relationship with someone that you are not turned on by can be very difficult to overcome. You mentioned some key points that raise some red flags that I would question:

1. Picture your perfect relationship. What would you need from your partner to sustain a healthy sexual attraction for him?

2. If you felt uncomfortable about his persistent groping when you went on your first date with him, what was it that made you decide to pursue a relationship with him?

3. Why do you think he knows so little about you?

5. If you had a friend that was in a relationship with someone who they were not turned on by, what would you say about the chances of their relationship surviving?

Reflect on these questions and answer them honestly. It seems as though you are doing everything you can to be involved with this man and are grasping at straws to find a reason to stay with him. You threw out all your conventional wisdom and intuition and took a chance which is very brave, but it is hard to be in a relationship with someone when you don’t feel like yourself or when you question it as deeply as you have. If you are having difficulty finding reasons to stay in your relationship then there is a possibility that it might not be what you are looking for. Good luck!

This is so simple, she needs stop acting alike a scared lil girl, and women up. Communicate with us men, we are not mind readers. Stop pretending. Open up, and be yourself.

If she is not comfortable having sex with him, and she believes sex is part of a relationship, she should not be in a relationship with him. I feel sad for her that she doesn't feel empowered enough to break up with him. No man should make you question your decisions.