YES, YOU’RE IN THE FRIEND ZONE 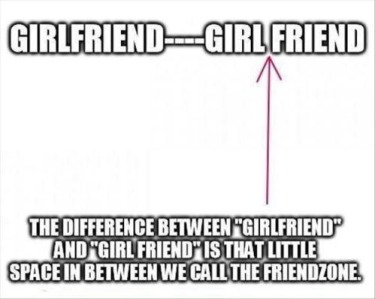 A major mistake that some men make is when they meet a girl that they are romantically interested in they try to take the friendship route so that the young lady becomes comfortable with them. I definitely advocate for people developing a friendship before they become lovers, but you still have to be absolute with your overall intentions. Many men assume that being a great friend to a woman will make you more attractive to her. They believe that she will see how wonderful of a guy they are and then fall in love with them and live happily ever after. Well, you couldn’t be more further from the truth. Although this does happen on occasion, the likelihood of this happening is similar to you winning the jackpot at the slot machine in Las Vegas. The minds of women operate completely different from the minds of men. Men will always regard the opposite sex as an object of sexual admiration. Women tend to put men in their lives into two categories: friends and lovers. It’s very rare that you can be in both at the same time or even fluctuate from one to the other.

The first rule is to be honest and upfront. If you’re afraid of rejection, I can guarantee you a spot in the friend zone. You can’t assume that woman knows your intentions. Just because a woman calls you to go with her everywhere such as shopping, clubbing, etc. doesn’t establish that you are interested in her. It actually conveys that you like being around her and you don’t feel the need to be sexual. This is another sure way to end up in the friend zone. You may consider this spending quality time, but she’ll consider this similar to spending time with one of her homegirls. Men who like women don’t hang around them and suppress their feelings.

Another pitfall is hanging around woman who have boyfriends, becoming their friend even though you like them because that is the only option available. It is quite true that this puts you in position to be the rebound, but there is a larger possibility that you’ll get so cool with her that you will be taken out of consideration. I’m not saying there’s anything wrong with being her friend, but you need to let her know that you are interested on a sexual level.

What’s even worse is when you know you’re in the friend zone, and you remain there, hoping that one day she will look at you differently and you will live happily ever after. Indeed, there is a way to get out of the friend zone, but I’m not going to talk about it here, because the whole purpose is not to be in that zone in the first place.

Before I close out this article there’s a couple of things that need to be acknowledged. Attraction is not based on logic. Being a great friend is not going to make a woman fall for you. Women like confident men, and a confident man is not going to allow himself to be ushered to the friendship zone. He knows he is a good man and will put his bid on the table. Being a BFF is not cool, unless you are actually content with it. Okay, so it’s great to have a title. So that is what she’ll introduce you to the next man that is about to pound her out as.. her BFF. So if you’re in this predicament, you have to think about the actions that led you to this point. Think about all of your missed opportunities. You believed that being a great friend would automatically give you priority when it came to who would be her lover. Although men might concur that they want a woman who can relate like a friend, women don’t think like men. They fall for real men, not BFFs

So when you see the signs that you are about to back up into this zone, put on your hazards. This is your last opportunity to let her know who you feel. Unless you like being the 3rd wheel, anything to be close to her I guess.

« MY BABY DADDY MOVED ON…AND I’M STILL SINGLE! (Previous News)
(Next News) WHAT ARE WE DATING FOR? »