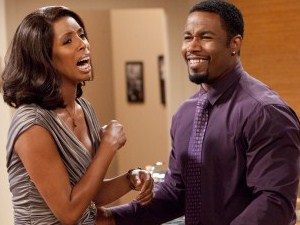 Actress Tasha Smith, of Why Did I Get Married fame, was recently ordered to pay her ex-husband $7,000 a month in spousal support, also known as alimony. This is in addition to the $50,000 she compensated him back in November (likely as alimony pendente) while they awaited the final divorce decree.

Some are calling her husband out as being less than a man for seeking and accepting spousal support, but women need to be mindful that with equal rights (benefits) come equal responsibilities (liabilities). As such, just as many men have negotiated pre nuptial agreements before saying I do, it would be wise for women to begin to do the same.

In general, there are four types of alimony.

Temporary alimony: Support ordered when the parties are separated prior to divorce. Also called alimony pendente lite, which is Latin, meaning, “pending the suit”.

Rehabilitative alimony: Support given to a lesser-earning spouse for a period of time necessary to acquire work outside the home and become self-sufficient.

Reimbursement alimony: Support given as a reimbursement for expenses incurred by a spouse during the marriage (such as educational expenses).

As you see, nothing about the descriptions/categories above suggest that alimony is or should be gender specific. As such, a man has as much of a right to petition the court for spousal support as a woman. Just as I would disagree that women who seek alimony are gold diggers I disagree that men who seek it are any less of a man. I would however suggest that couples negotiate a pre nuptial agreement prior to saying, “I do.”

« DWIGHT HOWARD: IT SEEMS LIKE YOU’RE PETTY (Previous News)
(Next News) YOU KNOW WHY YOU’RE SINGLE & SO DO I. »