It’s All In the Approach 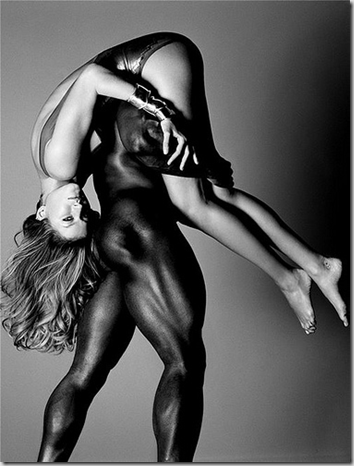 Yesterday, on the Code Red Flag (“CRF”) Facebook fan page we discussed how men approach women. To start the discussion, I posted this anonymous submission:

Why do men…I mean manchilds do this?”

The responses from the CRF members ranged from, “why did the friend need to say anything” to ” Silly boys demonstrate that they have no manners and we get the insults” to “Just say hello back and keep it movin … Why have an attitude when someone speaks to you?” Hold that thought.

Later on that day, I received a message from a guy (Guy 2). He wrote, “Dayum…U a model or actress or sumthin?” I did not respond, but I shared this exchange on the CRF fan page. Again, community members responses ranged from, “Looks like we need to start classes called How To Court Effectively” to “Help me understand whats wrong with what he said because I dont get it. Are you offended that he likes your looks?” Hold that thought.

Later on that evening I get another message from a different guy (Guy 3). This one wrote,

“I would like to introduce myself. My name is *****. And I really enjoyed your profile. I’m impressed. I just wanted to let you know that…”

I know you’re wondering, did I respond to him? You bet I did. You see it’s really all about the approach.

Guy 1, with the chips in the mouth hollering “hey ma” is a turnoff for any woman who doesn’t keep her pum pum on the clearance rack. Some may say she should have said hey back. Some may say that just because a man says hey does not mean that he’s trying to sleep with a woman. That may very well be true. However, no one is under any obligation to speak to a stranger on the street. Additionally, such an approach doesn’t warrant a response (maybe a sideeye) and surely would not have received one from me either. If that makes me stuck up and bougie, in the words of Hip Hop artist Red Man, “I’ll be that.” Like I tell my girlfriends who complain about being called bougie, “better bougie than ratchet!”

Now on to Guy 2. Where do I even begin? “Dayum?” Really? As one member suggested, it would seem that some men, using the term generally, have not been taught how to respectfully approach a woman to whom they are attracted. While complimenting a woman on her looks is always nice (a bit overdone, but still nice) there is a right and a wrong way to compliment. How this guy did it, wrong. “Damn can I drink your bathwater” (yes, I’ve heard that), wrong. “I just want to lick you” (I’ve actually had a guy lick my arm on his approach), wrong!

You know what would be acceptable? I was out with a platonic guy friend one night and I caught this guy staring at me. He saw the look of discomfort on my face and decided to approach. He apologized for staring and said that he just wanted to tell me that I look amazing. He then wished me good evening and went along his business. Now that I can respect!

Guy 3 gets a round of applause. And it disturbs me that we live in a society where I have to give a round of applause for what is considered socially acceptable behavior. I responded to him because he approached me with manners. Sadly, that seems lost on too many these days. Does that make Guy 3 the one? Of course not. What it does is opens the door for a conversation. He’s gotten farther with me than either of the other 2 so he’s already winning.

I think @DarnelCooper is dead on. It is easier being the approachee than the approacher. The hones is all up to the approacher. The approachee has the luxury of the Praetor at the Roman Coliseum...giving the thumbs up or thumbs down...to determine if a guy will live or die. But it's the Gladiators (us guys) that must be battle-hardened and battle-tested, forged through the streets/clubs/bars of rejection - just to enter the sands of the dating arena. (how I got on some ole Gladiator metaphor? But it works.)

Rejection is easy to dismiss when you are the one accepting the offering. Tell that to a man who has, with respectful tone and approach, been rejected time and time again. It eats away at your self esteem. Because YOU are being rejected...not your approach. YOU! No matter how easy it is for a woman to say to a man whose been rejected, "get over it', it still hurts to be rejected. And natural human behavior will seek to insulate itself against that pain.

And that leads me to Guy 1 and Guy 2. I don't condone their approach...but I do understand it. And it makes sense to me why they do it (even though I don't condone it). Let me explain.

One way to protect yourself from the pain of rejection is to desensitize your feelings from feeling pain. It's the same thing a child who suffered abuse does to function. They go numb. They shut down any emotions of love in order to protect their feelings and cope with what's being done to them. Well...some guys do the same thing. They shut down their emotions to protect their feelings from rejection and the feelings that come along with it. Their lack of feeling allows them to say (whass good ma) and do (being licked) anything they want to do...without feeling rejected on the other end of their approach.

Thus, the punishment you gave by not speaking to those guys was never felt (btw...you did punish them...although speaking to them was not an obligation, withholding a socially reciprocal salutation was your way of punishing them for their inappropriate approach...juxtaposed to the way you rewarded guy 3 for his appropriate approach). When you (rightfully so) reject them, their internal emotional-protection kicked in to protect their feelings. So...your rejection of them was not because they're rude and disrespectful. No...no...no. It's because you're a "raggely ass laces out wig wearin mud face b*tch". Their feelings are in tact...you're the one with the problem...all is right in their world.

Again, I don't condone it. But I do understand it. Guy 3 perhaps doesn't have those same emotional protection strategies. But he does have something...just not the same as guys 1 and 2. Once you find out what his are, lets see if he's still winning.LOL

Incidentally, I wrote a followup article for how men can build up their own confidence. I'd love to get your thoughts.

@HeathWiggins Wonderful response. I will be sure to read and comment on your post on confidence. I wonder though if you have over thought some of these men's intentions. I believe it may be true for some, that the fear of rejection is why they choose to approach disrespectfully but I don't believe that is the reason why a majority of men do it.

I believe that a majority don't know better because they haven't been taught better. Neither parent taught them how to respectfully approach a woman and most of the women they approach in this manner reward their inappropriateness so they are never forced to learn a new manner. Just my thoughts.

@HeathWiggins Also, I just want to let you know that women have suffered from rejection too. It's not only men. I know I have. As adults we learn that rejection is a part of life. If you're never rejected from anything or anyone then you probably haven't lived your life to its fullest extent.

I happen to be the kind of women that goes for the unbelievable. I am a high school drop out with a GED who also holds an Ivy League degree and a top law degree. Had I been fearful of rejection I would have been stuck with only a GED.

Nothing ventured, nothing gained.

....................... Men don't make the game. Women do. Don't be upset because too many women have punished men for a simple "hello" or "How do you do". I really wish there was a yearly convention of Womankind in the middle of the country to determine what forms of address will be excepted by all.
Heck,.. I once knew a woman who honestly identified herself as a ho,... And was offended if you called her miss or ms.

@DarnelCooper It wasn't I who was upset, but the men, again I use that term generally, that were upset when they did not get a response. It's easy for me to keep it moving and not respond. As far as the woman who rather you refer to her as a hoe, I suggest you take a moment and reflect why you were having discussions with a woman of that caliber.

I'm also not sure what you meant by being punished for a simple hello, I've never seen that done. Maybe you can elaborate? Either way, I point you back to the line that reads "no one is under obligation to speak to a stranger on the street."

Thank you so much for taking the time to read and comment. Much appreciated.

@DenaReidEsq @DarnelCooper
Well,... As a woman,.. I wouldn't expect you to be around when a woman on the prowl is approached by a man and decides that "Hello" is too weak an opening line.

Not all men respond with foul language when a woman decides she doesn't like what he says,.. most of us just walk away.

(It takes more to approach than be approached, and when you mature, you don't waste time with immediate rejection,.. the days of verbally sparring seem to be over, there are enough people out there to not have to work your way thru to a woman who may have been that abrupt or required a clever "line" to get her to open up a little. "Life is too short.")

I find it interesting that you are not aware of the dating scene where too many women expect "game" even the intelligent ones, because,.. well I don't know why,...I just know that they expect something other than "hello".

Shrug,.. No heat, glad to try to explain where I'm coming from.

As for the woman with identity issues,.. its not a matter of caliber,.. its a matter of talking to her and finding out thru convo what kind of person she is,.. a hazard of being polite.

fortunately for her,.. there are a few stupid or weak enough to enjoy the premise that she sees herself that way,.. I wasn't it.