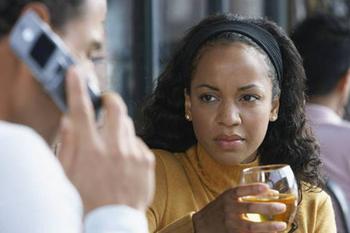 *This is based on a true story.

Kim is young, black, and doing it. A young dynamic professional who is sought after by many. Despite this, she rarely dates. One night she was out with her girls, enjoying an ladies only night out at a local lounge–where she met Anthony. A seemingly nice guy with good teeth (she is a sucker for a man with a nice smile).

They talk on the phone frequently and have great chemistry and conversation. One day he invites her to his house for a date. He said that he didn’t have much money to go out so he would prefer to stay in. Kim thought to herself “Ok, he is a pretty nice guy let me give it a shot. Maybe he is strapped for cash and can’t afford it”. She arrives at his house all dressed up– you know cute jeans boots (in true Bad Bitch fashion).

He opens the door and immediately she notices that he is dressed in sweatpants and a t-shirt looking like he is getting ready to scrub his bathroom floors or change the oil in his car. Hmph! This turns her off immediately, but she is still trying to give him the benefit of the doubt, thinking that maybe he just didn’t have a chance to get dressed yet. Not to mention, she could smell some good food cooking in the kitchen and she thinks…“maybe he didn’t have a chance to get dressed because he was cooking for me? How nice!”

She sits down on the couch and they start watching a movie. All the while, she is wondering when he is going to offer her a drink and something to eat (by now an hour had passed). She could smell fish and thinks to her self “oh, that’s sweet. I told him that I love seafood.”

He excuses himself and goes into the kitchen. When he returns, she realizes that he is chewing on something. Kim thinks “Oh hell no! Did he really just go into that kitchen and eat some food and come back in her smacking, while I’m sitting here thirsty and hungry?”

Kim says “What are you eating?!” He replies “Nothing!” meanwhile his mouth is so full he could hardly open his mouth to speak. You know that look a kid gives his mother when caught red handed eating something he isn’t supposed to be eating.

Kim left without saying a word. She knew this was a CODE RED FLAG situation. She couldn’t believe that a man would be so selfish as to invite a woman over to his home for dinner, cook food (only for himself) and expect her to stick around. Especially, after she had already compromised by going to his house for their first official date. Needless, to say he called her phone like a stalker for the next two weeks until he got tired of singing sad love songs to her voice mail.

See ladies this is just one example of how the “stay at home date” can go terribly wrong when the standard is not set early on in the relationship. If the first date is initiated by him and he wants to stay in, that is a CODE RED FLAG. What he really wants to do is smash and for cheap. He’s not into taking you out and showing you a good time. He is trying to get you nice can comfortable on his couch, in hopes that you will drop dem drawers after a couple glasses of wine. BEWARE!!!

Chanel Free is a 32 year old Brooklyn native, mom of two beautiful girls, professional school counselor, secondary instructor at Seton Hall University, and self proclaimed B.A.D. B.I.T.C.H. Ms. Free (as she likes to be called) was not always free. She discovered her Bad Bitch and freedom while coping with the worst breakup she ever imagined. She is the go-to-girl for candid, real-talk, no holds barred advice on life, love, and all things bitchy. A mother figure to some, but there are no mom jeans in her wardrobe–its leopard and leather for this edgy Brooklyn Mom. Writing has always been a passion of hers and more recently she has begun sharing her adventures through her blog Ms Free Unleashed. She has also worked as a Guest Blogger on Cherry On Top, Mommy Delicious, and The Young Mommy Life.