Is Cheating the Norm? 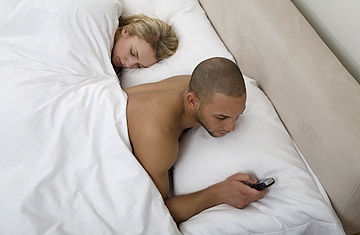 On Wednesday, I was the special guest of The Broken Filter Radio Show. Although I went on the show to promote my new book, Flag On the Play, I was given the opportunity to partake in most of the show.

I was warned beforehand by one of the fellas that I was going to be coming into the “men’s locker room” and that some of the things that may be said I wouldn’t want to hear. I said cool, some of my closest friends are men and I have four older brothers, nothing that this group of men had to say would be surprising to me. And boy was I RIGHT!

One topic that stuck out for me the most was regarding cheating. One of the guys proclaimed that 99% of men are cheaters. I’m not sure where he got his statistic from but I will say that I do believe it to be flawed. In fact, it inspired me to write a post on the Code Red Flag fan page. I wrote, “Unfaithful men’s favorite trick is to tell women that faithful men don’t exist. #DontBelieveTheHype.

I mean that, don’t believe the hype! There are men out there who are fully capable of loving and being committed to one woman. Furthermore, what women have to realize is that some men aren’t preparing to be husbands. Some get forced, tricked, or nagged into popping the question. Those men, who didn’t want to be married anyway, then think “I married her and I provide for her what more does she want? Just let me be a man!”

Let us not be mistaken, being a man is not synonymous with being a cheater. I will not generalize all men like this and neither should other women. In fact, a woman that generalizes men like this needs a Time Out! (fellas, I told you I’d have a book coming for you soon). Likewise, men who proclaim that all men cheat and women should accept this as a fact deserve a Flag On the Play!

« Marry You? What’s in it for Me? (Previous News)
(Next News) Who Knew Celibacy Was Sexy? »