HE ENCOURAGED HIS WIFE TO DATE OTHER MEN 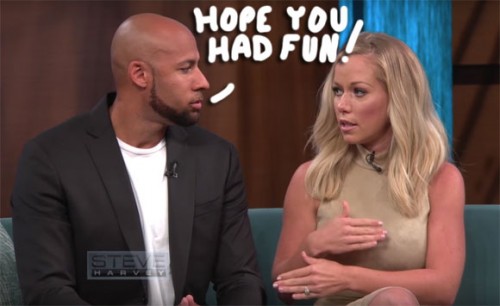 Yes. You read that correctly. A husband has actually encouraged his wife to date other men. When I read the headline for the article about Kendra Wilkinson and her husband, Hank Basset I immediately thought it meant they had an open marriage. But after reading the actual story I’m not so sure.

As rumor goes, Hank, a former NFL player was caught cheating on his wife with a transgender woman. His approval of her dating other men is his way of saying he’s sorry for his indiscretion. Even after one of her exes attempted to reenter her life Hank encouraged her to, “explore the relationship.” Hank believes giving Kendra permission to step outside their marriage, should she choose to, is what he deserves for cheating and embarrassing her nationally. He also thinks it allows him to appreciate how lucky of a man he is to have her as his wife.

While this may seem like a pass to cheat, the couple clarifies that it was not. While Kendra could explore relationships with other men by going on dates, flirting, and having conversations she was not supposed to cross the line into a physical relationship. So this wasn’t Hank saying that she could pay him back by sleeping with another man as well. He was just giving her room to make the decision as to whether to forgive him, stay married to him, and work out their issues or go see if the grass is truly greener on the other side.

Kendra believes this freedom to choose is what helped her decide not to seek a divorce from Hank. And Hank feels he has learned his lesson. There relationship is not open, but it has open communication which is helping them get passed their marital issues and learn to appreciate the love they have for one another.

Do you think it is wise to give your spouse permission to date other people? Why or why not?
______________________________
Written by Dena Reid, Esq., Founder of Code Red Flag and Amazon bestselling author of Flag On The Play. Ms. Reid is also a legally trained Conflict Mediator/Coach who specializes in family and domestic disputes. Ms. Reid writes an advice column, hosts events, facilitates workshops, and speaks nationwide on a variety of topics. For more information email info@coderedflag.com.

« ASK HIM ABOUT HIS INTENTIONS (Previous News)
(Next News) WHAT EVER HAPPENED TO TIL DEATH DO US PART? »