DON’T CLAIM HIM, HE DON’T WANT TO BE CLAIMED 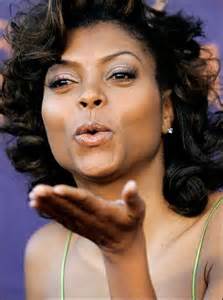 Taraji Henson, one of my favorite actresses and Howard University Alumnus, has some dating advice for the single ladies. During a recent interview with Steve Harvey, of Act Like A Lady, Think Like A Man fame, Taraji said she refuses to claim any man publicly that has not proposed to her. Does she have a point?

How often have you rolled your eyes at the woman who’s Facebook relationship status seems to change once a quarter? One day she is singing the praises of her new found beau; he’s her king, her everything, her soul mate. A few weeks later every photo of them together has somehow been voided from the social realm like the relationship received an expungment.

Under Taraji’s plan, there is no need for the social status change nor the clean up of photos because the flavor of the week, month, quarter, etc., never was introduced to the world. There need not be a coming out party for every guy you date, kiss, or do the horizontal tango with.

I know, I know, you thought he was the one. I’ve been there, we’ve all been there. But after a certain age you have to come to the realization that a man isn’t the one until he proclaims his love for you by asking you to be his forever. Until then, don’t give him too much airplay in your world. He hasn’t asked for it and in a few months you will realize why he doesn’t deserve it.

That’s not to say that you should hide your beau. All your dates need not be Netflix & Chill. You can be seen in public with him. Just don’t start acting like this man who has made no real commitment to you is the best thing you ever had when you just made that proclamation about Tyrone just a week ago.

Now I know that marriage isn’t the end all be all for many women, myself included. And there is nothing wrong with that. However, Taraji’s advice still applies to this scenario. Don’t want to get married? Fine. No need to claim any man at anytime. Just date for entertainment purposes if that’s what suits you. Social media, just like your friends and family, doesn’t need to be introduced to none of these Mr. Right Nows (and truthfully, Mr. Wrongs).

« IS THIS A RELATIONSHIP OR A PRISON? (Previous News)
(Next News) “BECAUSE I’M AN ADULT”: The Double Standard of Respect in Families »

Love this! And I agree, I've noticed the moment you start talking good about then is when they start fcking up and then you gotta take back all those nice things you just said! UGH!

Yes! I agree with Taraji because this way a woman isn't getting played by thinking she's in a serious or committed relationship when she really isn't. This way you know what IT is.

I hadn't thought of it like that but I understand where she coming from. I can say myself at the stage I'm at right now if I don't agree to be claimed he needs not worry about me claiming him, privately or publicly.