BEFORE YOU CHASE MR. RIGHT AWAY 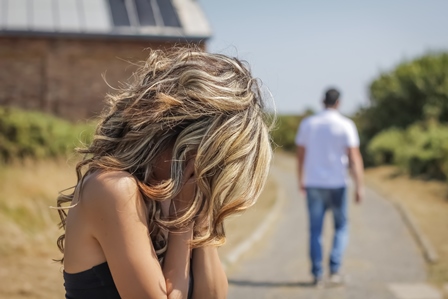 Congratulations! You’ve made it to another new year! The Lord has answered your prayers by entrusting a man with your heart who actually treasures you for the person you are. He’s not caught up in the superficial craving Serena, Halle, or the next Kardashian on deck. No, no, no no, he wants you in all of your muffin top, flat back side glory! So now that you have met your Mr. Right, I have a few tips to keep you from chasing him away. I see you looking bewildered but trust me, when you encounter the unknown (like a good man), it’s easy to create chaos in order to achieve balance in your bizzaro world. So before you sabotage your good thing, I have three tips to help you from chasing him away:

1. Hearing and Not Listening

About five months ago, I wrote a piece about people not being able to listen. Although communication is a vital building block of any relationship, most of us skipped the class on listening. So instead of listening, we give an ear to make sure that what is said lines up with our own agenda. If it doesn’t, we don’t wait to hear the purpose of the idea. We interrupt and challenge based on how the weather is on our side of the street. Ladies (and I mean this with all sincerity), you all have mastered vocalizing your thoughts to your man but few of you have given him the same respect.

For example, I had a lady friend that I admired for some time (let’s call her Controlling). We had been conversing and going out as time would permit. We were both single parents and were short on time. Due to our complex schedules, we weren’t able to date as much as Controlling wanted. She brought the matter up to me on several occasions. Each time we discussed it, I told her that I agreed that I couldn’t give her the time she desired I went on to say that she should date other people. Instead of heeding what I said, Controlling would pretend to be fine with the arrangement. It didn’t matter whether or not I was being pleased as long as it benefited her. So every so often, I would get a text stating that I wasn’t making time for her again. The text would go on to state how I was stringing her along but I had previously stated that I couldn’t give her what she wanted. Does it sound like she ever listened to me?

You are used to dating knuckleheads that would just lay on your couch and play Madden all day right? Knucklehead was there whenever you needed to talk or have your cookies baked because he had no job right? Knucklehead was able to attend all your family functions and what not because he had no other aspirations right? So enter the man who has aspirations, decent employment, and . . . oh my gosh, male friends! Why would you expect for this good man to be as available as the knucklehead? Excuse me for saying so but that’s just crazy! Why would you get mad if this working man can’t respond to your text as soon as you send it? He’s probably in a meeting. Instead, you go to his car and check his odometer to calculate his going and coming. Craaaaazy! Now I know for some of you, just reading this sounds cuckoo for Cocoa Puffs, however I have seen this more often than not. Is it the environment that I’m living in? Eh, maybe but I’ve seen guy friends in other parts of the U.S. run away from chicks who are exactly like this! (Myself included) I understand that having a man means the world to you but the world doesn’t just consist of the two of you. Most guys I know have male friends and kids. As long as the man is attending to your needs/wants majority of the time, there is no need to cross-examine him for the one or two he didn’t! If you continue to allow your insecurities to dictate your actions, you will lose Boaz quickly. To the ladies that perform this utter craziness, stop!

Should I even start on this one? Tell me something ladies, why would anyone in a prosperous, new relationship continue to discuss their previous boyfriend/spouse? We all know the answer: because they haven’t gotten over the guy. I’ve had quite a few chuckles this year seeing how exes were still climbing in my inbox while blasting to the world that they are in “better” relationships. One of my exes continued to look for reasons to come to my house even though she was engaged. Another requested me to be her Facebook friend again even though she supposedly hates me. She would post subliminal messages stating that when I had the chance to be with her, I didn’t treat her right. She even went as far as to post the Bruno Mars song “When I Was Your Man”, dedicated to me saying that I had my chance and now it was on to the next man with several hashtags. So I asked myself, why the hell did you request to be my friend? To tell me every other week that you have a new man? Oh, okay. I always thought that if you had better, there was no reason to dwell on the past? Now ladies, if you find yourself engaging in this pettiness, please take time to heal before bringing someone else into your turmoil. It will help you from chasing Mr. Right away.
______________________________
Written by Michael Dock, Founder of The Wednesday Gentleman