WE CAN’T BE FRIENDS! 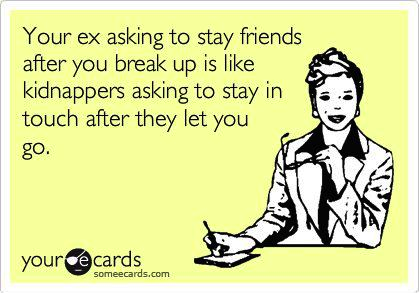 It’s over. You and your significant other have decided that you are ending your relationship. Now the question of remaining friends arises. You’re not sure whether it’s a good idea. And truthfully, it might not be. While I am friends with a few of my exes, not all of them make the cut.

Friendships are relationships without physical intimacy. As such, the basic tenets apply.

Being Loyal– if your relationship ended due to disloyalty why would you want a disloyal person as your friend?

Being Dependable– friends should be reliable and dependable. If your former significant other was neither during the course of your relationship, don’t think the downgrade to friend will change that.

Being Trustworthy– trust is the main ingredient in friendship. You can’t be friends with someone you don’t trust. There is another word for that, frenemy. A frenemy is a friend who really is an enemy. Don’t sign up for that

Not all relationships end badly. Sometimes you find that you and your mate are just heading in different directions. If that’s the case, a friendship is possible, and may even be successful.

However, when a relationship ends because it was toxic it is advisable that you make a clean break. Remove that person from your life because there is no friendly foundation in such an ending. And saying yes to a friendship will only prolong the toxicity.

No one says that you have to be enemies with your ex, but you don’t have to be friends either. Now he/she is just somebody that you used to know.

« SO YOU WANNA BE A PLAYER? (Previous News)
(Next News) TRUMP IS YOUR HOMIE »