CAMILLE COSBY, STAND BY YOUR MAN? 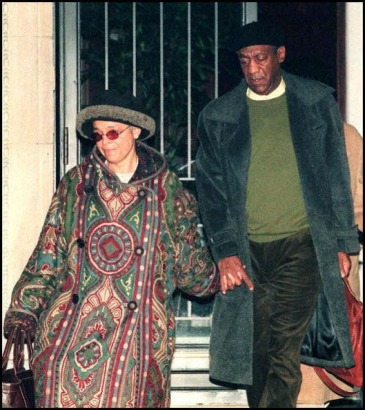 In a case of “stand by your man,” Camille Cosby sends out a statement in support of her husband. I’d expect this from a wife. After all, most criminal’s families are unaware of their criminal activity.

Her statement as reported by ABC 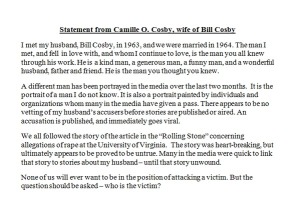 Unless you’ve been vacationing on the moon, you should know that upwards of 20 women have recently come forward accusing Black America’s favorite dad, Bill Cosby, who portrayed the loveable Heathcliff Huxtable on the Cosby Show television series, of drugging and then raping or sexually assaulting them some years ago.

When the first woman told her story many were skeptical asking questions like “why now?” Some have even gone as far as to accuse the media of a conspiracy to take Cosby down. A conspiracy I don’t believe has much, if any merit.

Cosby himself has stayed mum, other than a recent quote saying to only trust black journalists because they are “neutral.”

But now Camille has spoken. And I can’t say that I’m surprised or shocked by her stance in support of her husband. Camille is old school. She’s played the doting, if not submissive, wife their entire marriage. And Cosby has taken damn good care of her in return. If I was Camille, I surely wouldn’t want to believe that my husband could be this monster he’s accused of being.

But where and when should a wife start start to question her loyalty? Years earlier, Cosby was accused in a similar manner and chose to settle that case out of court. Now here again, more women, some quite respected in their own right, are pointing the finger at him again.

Since we are not in Camille’s shoes all we can do is speculate as to what we would do. And if you’re anything like me, I want to think that the man I chose to marry would never lead me down the wrong path. But, at what point does a wife start to recognize the red flag and begin to question her husband’s leadership and character?
_______________________________________
Written by Dena Reid, Esq., Founder of Code Red Flag and author of the Best Seller Flag on the Play.