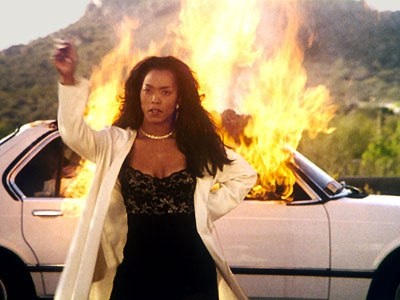 I’m not an angry black woman. I’m just fine by myself and that’s where you got it twisted.

Oh, so, I’m angry because I no longer pretend like I don’t see or deal with your mess and I choose not to deal with you?

As soon as they look at you, yes the ones who have been the misusers and abusers, the first thing they say is, “here comes another angry black woman.” That’s why I don’t date them.

I’m sure you don’t date us due to the fact that you spent the earlier years of your life destroying the soft, kind, happy, loving women we used to be. With all your lies, cheating, womanizing and deceit. Oh, but now that you damaged me, I’m the one with the problem and you don’t want to date me.

I don’t have an attitude. I have trust issues because the man with the brown face who looks like my daddy, who was supposed to respect and protect me, misused me, took advantage of me and disrespected me. Oh, but now you have the nerve to say you don’t date me. The one who had your back regardless of how bad you treated me. The one who gave you children because I was dumb enough to trust you without a ring. Oh, but you don’t date me. The one who paid all the bills when you lost your job and still treated you like the man when you couldn’t even provide. Oh, not for me, you couldn’t even provide for yourself, but yet and still, I was still there believing in you. Until the day you had the nerve to up and leave me for another woman, because you claim you couldn’t take the stress. Oh, but you don’t date me and you’re the one that’s the mess.

I’m sure my sisters can attest you not dating me is the best thing yet. You see, I would rather be viewed as an angry black woman taking care of me as opposed to a man who moves from woman to woman because a good black woman you just can’t see. Thank God for so many of us who are recognizing the weakest link. Yes that would be you, a black man who lies and is afraid to face his own truth. The truth is I’m not an angry black woman; I’m just strong and that’s too much for you because you are weak!

So move on to women of different races the result will be the same because the common denominator is you.

Listen my sister, if you want to believe his lies that’s cool because when he’s done with you, you’ll be an angry white, Spanish, Indian, Jamaican or Asian woman too.

I’m not an angry black woman. I’m just not the same black woman that allows myself to be disrespected, belittled because of my color or used by you!

« DEAR CRF, “IS IT OK TO DATE MY EX’S FRIEND?” (Previous News)
(Next News) CHILDHOOD CRUSH OR GROWN WOMAN LUST? »

So, you mean to tell me that a black man has more control over the anger and aggression of black women than black women have over their own? Your claims are absurd and they're tell-tell signs that you happen to be a bitter black woman. Black men are not the common denominator, black women are.