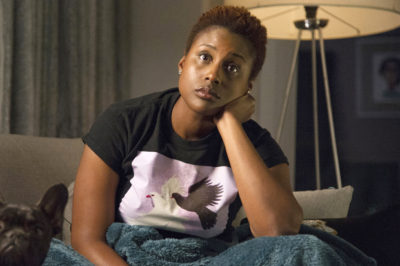 Issa Rae’s brand new show, “Insecure,” has captured the imagination and the realities of far too many of us in its pilot season. For those who haven’t watched the show, I’d encourage you to catch up. It airs on HBO.

In short, the show follows the lives of three late 20-something’s as they grapple with the reality of ever looming adulthood. Complete with the full gamut of adult issues, ranging from employment issues, to the full gamut of friendship and relationship troubles. It represents a mirror for each of the characters, and in some respects, for us all.

That said, as the season has drawn to a close, I’ve noticed that a number of think pieces have emerged, all from a woman’s perspective, and almost all universally blasting Lawrence for his “wholehearted mediocrity”. He’s been called everything from “shiftless”, to “milquetoast”, as writers have worked tirelessly to cast him as a shining beacon of……nothing special at all. As if that wasn’t bad enough, Issa’s cheating has been glossed over at best, and at worst, entirely justified, as collateral damage for Lawrence’s perceived indifference. But there are some realities that have gone overlooked in this discussion, that I think bearing out.

But there is something that was present, and is present in every man and his environment that nobody wants to talk about: Toxic Masculinity. It is this notion that a man has to exhibit a certain machismo, and gravitas in order to qualify his manhood. He has to have a CERTAIN kind of job. He has to make a CERTAIN kind of money. He has to have a CERTAIN kind of swagger. What I’ve learned is that women are some of the most ardent brokers and power players in the dispensing and supporting of toxic masculinity. Women support and codify its existence, and with how they respond to men, they legitimize a man’s need to adhere to its standards. Sadly, they later become victims who are eaten by the monster they are so complicit in creating. But that’s another article for another time.

Back to Lawrence. As a man who has been EXACTLY where he is in my 20’s, I saw a bit of myself in him. What I saw was a man that was MORE than someone who was “lazy,” “couldn’t find work,” or was “allowing his woman to do the heavy lifting.” AGAIN, He was depressed.

I don’t know that a woman can adequately understand what happens to a man when one of the PILLARS of his identity, usually dispensed to him through toxic masculinity, is involuntarily removed from him. Men are often defined by what they do, how much means they have to provide, and the strength of their character, and their level of “swagger” – the last of which, ironically, can be severely impacted by the first 3. Women often choose men to date, based on these things. So when one of these things is removed from our identity, there is a HUGE sense of self that is lost. Notions that Lawrence was LAZY, or willing to let her play the breadwinner role, are misguided at best and speak to the worst of our assumptions about men at worst.

Lawrence was wrong for seeking comfort outside of his home.

Negativity, is NEVER the right way to motivate the KING in him.

I’ll say it again, NEGATIVITY is NEVER the right way to MOTIVATE the KING in your man. Eventually, it will either push him further down into a hole, or it will breed resentment. As I was watching Issa and Molly talk out the details about Lawrence, I couldn’t help but think, she needs to be telling Lawrence this. And she did, in the most DESTRUCTIVE way possible.

How she communicated her displeasure to him, was the very definition, not only of passive aggressive behavior, but also of TERRIFICALLY poor communication. Words Matter. How they are delivered matter. Who delivers them matter. And timing Matters. Don’t believe me? Just ask Tasha, the Bank Teller Lawrence was perforating in Episode 8. She was able to be “that chick” precisely because she began pouring into Lawrence long before Issa cheated on him.

Frankly, people – all people – are like vessels that hold liquid. When they are FULL to the BRIM, there is no room for someone else’s water to come in and fill in any empty space. The water just pours over the edge and off the side. Nobody can pour anything into my spirit, because my WIFE keeps me full.

I’m not suggesting that a woman blow sunshine up a man’s ass. But the old adage “do no harm” applies here. If you can’t say something nice……….

Issa cheated, because she chose to.

If I read one more article, making Issa’s infidelity somehow a referendum on Lawrence, I will gouge my eyes out. Issa cheated. She had other choices. She took the wrong decision point on many different occasions. When she texted Daniel back **secretly** “I miss you too”. When she **Manufactured** a reason to show up at the club in her “fuck me” clothes, KNOWING he was going to be there. When she went to his place **RIGHT** after seeing him at the club. When she went with him to his studio. Ultimately, when she fucked him. By the way, it should not be lost on anyone that Lawrence, who apparently had been dating her for nearly a decade, had NEVER heard of Daniel, until AFTER she got sloppy with her phone. That isn’t a Lawrence problem no matter how soft or ineffectual one believes Lawrence to have been.

It should ALSO not be glossed over, that Lawrence had PLENTY of opportunity to take Tasha’s low hanging fruit, WHILE still in a relationship, and he opted NOT to cheat on Issa.

Which brings me to:

Lawrence and his sex scene at the end of episode 8. Lets dispel a myth or two right now. a) Lawrence DID NOT CHEAT on Issa. They were broken up at the end of episode 6. Certainly by episode 7, they are not a couple. So he wasn’t UNFAITHFUL. There was no INFIDELITY.
b) Lawrence’s sexual dalliance with the bank teller was not about “revenge sex”, as some writers tried to categorize it as. Lawrence’s sex scene was an expression of his “crisis of confidence”. He had something to prove to HIMSELF. He needed to prove that he was “still the man”, desireable, and attractive. And he wanted to prove it all in the most toxically masculine way imaginable.

Infidelity can rob a person, man or woman of their sense of self. We should not be so quick to underestimate the effect it can have on our decision making. But even MORE THAN THAT, we should stop creating narratives that define masculinity, in the most toxic and pervasively disastrous ways imaginable for our collective. Once we do that, we will have less men, defining their manhood by the notches on their belt, and accordingly, less scenes like the final scene in Episode 8, hitting home for far too many people.

Allow me a moment to pause for a second and go off on a tangent. Because I am not #TeamLawrence here. I would be pissed if my daughter brought home a man in Lawrence’s condition. I would be even MORE pissed if she spent YEARS of her life, waiting for a man like him to get himself together. It is my view, that many women spend TOO much time, waiting on the WRONG man, building the WRONG man up, and pouring into the WRONG man’s dreams. So this isn’t a zero-sum effort, wherein I believe Lawrence was a Harry Potter, and Issa was Lord Voldemort. So I’ll say it again, Lawrence could not show up to my house for thanksgiving, in the condition he existed, at ANY point, throughout this season, unless they were MARRIED (Why hasn’t he married her after all this time anyway? Surely he wasn’t unemployed for their ENTIRE relationship. Again another article for another time….), and his unemployment was temporary.

So, how do we prevent more Lawrence’s and Issa’s showing up in our lives going forward?

We need to acknowledge some things. Ladies, not all men cheat. So LABELING all men as cheaters and womanizers, as some sort of justification for Issa’s “get back” is a false narrative, and – get this – actually HINDERS your cause to get SOME men to act right.

One of the things that I’ve found to be true, is that transformative change, is often influenced NOT by the opposite sex, but by a persons same-sex peers that they happen to respect immensely. So, ladies, you are not going to affect the men you want to change, by typecasting ALL men in the same light. If you want men to modify their machismo, and attitudes, then you need to actually ENCOURAGE your male ALLIES. The men, other men have NO CHOICE but to respect. And NOT because you agree with them on what manhood means. That isn’t for you to define for us. REAL men define REAL manhood. Not women. Encourage your male allies by trusting them. By aligning them. By dating them. By loving them.

And start holding your sisters accountable in a way, that NO MAN ON EARTH can. Because she respects you more than she respects US. For every drug dealing wannabe womanizing thug, we MEN need to check, there’s a woman (or several) out there who is dating him, sexing him, giving him her very best, while ignoring more suitable suitors, because they aren’t as exciting, that YOU LADIES need to check. For every Lawrence that we need to get a hold of and slap some sense into, there’s an Issa, that you ladies need to hold accountable.

Fellas, the same thing applies. HOLD your BOYS accountable. If he’s not handling his business, HOLD HIM ACCOUNTABLE. If he is not taking care of home, HOLD HIM ACCOUNTABLE. If he is cheating on his woman, HOLD HIM accountable. Men need other MEN they respect to get their “act right” on sometimes. If he ALREADY holds his womans opinion in little regard, he isn’t going to hear anything she has to say anyway. So YOU, men, hold your “Lawrence’s”, AND YOUR “Daniel’s” (who slept with someone who was with someone else, and didn’t care), accountable for their fuckery.

Again, we need to have a talk about mental health and depression. We need to build each other up more. We need to recognize when it’s not working for us and WALK AWAY before CHEATING, and YES, we need to hold ONE ANOTHER to a higher standard of excellence, so that we can minimize the things that make us ALL insecure, and maximize our greatness as a collective.

« WHY CAN’T A MAN BE MORE THAN JUST A PROVIDER? (Previous News)
(Next News) MY BLENDED FAMILY: A STEP FATHER’S STORY »