10 Reasons Why He Cheated 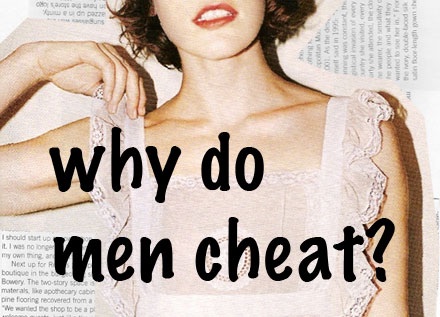 Cheating hurts. Often women question why the man who claimed to love them would cheat. Well, the Huffington Post has created a list from 10 male cheaters. Do any of these reasons make the cheating easier to handle?

1. Someone was pursuing me. “I’ll [sleep with] a woman to settle my curiosity. It has nothing to do with what my main girl is not doing, it’s just, someone offered, and I was curious and wanted to test the water.” –“Doug,” 42

4. I’m not attracted to her anymore. “This is terrible, but my wife gained 30 pounds after she broke her foot, and I started to look elsewhere for sex. The cast and crutches, watching her struggle, it was just ugh. I was there for her, but she didn’t arouse me anymore. I’d give her a kiss on her forehead and go out to [sleep with] someone else.” –“Thomas,” 44

5. Other options are always available. “Why settle for one sex partner when you can have two? Or 10? The ladies don’t seem to mind that I’m wearing a ring. And I have my pick of the litter.” –“Jack,” 34

6. She always accused me of cheating, so I strayed. “I figured, what the hell? She thought I was sleeping with my coworker, our neighbor, random waitresses and I wasn’t doing a thing. NOW I am seeing someone and she doesn’t have a clue. I can honestly say that she drove me to do it.” –“Michael,” 39.

9. I’m fulfilling a need. “Being with someone else every now and then has nothing to do with my primary relationship. It’s not cheating; it’s just fulfilling my needs as I see fit.” –“Mario,” 31

10. I was conflicted about my sexuality. “I cheated on my girlfriends in college to prove to myself that I was into women, but it was a lie. I’m gay. I’ve always known it, I was just afraid to act on it. Now I’m in a monogamous relationship with my boyfriend and we’ve been together for two years. I would never cheat on him.” –“Charlie,” 28

The more I think about these responses, the more I realize that cheating is rarely about the girlfriend or wife’s shortcomings, cheating is mostly about a man’s greed.

None of these reasons would make me feel better about the fact my man cheated. Which excuse is most bothersome?